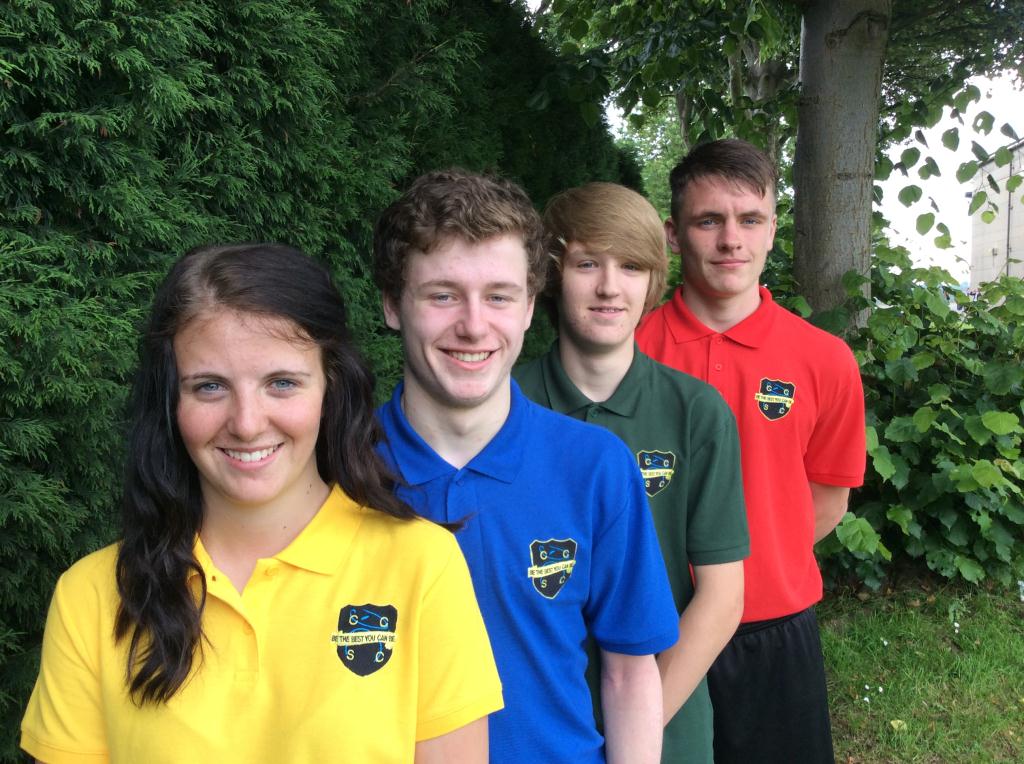 The choice this year was a difficult one; with a short list of approximately 8 students, the PE department deliberated for a long time before making a final decision. We are extremely proud to announce that the new house captains are:

William will lead Elgar house. William studies GCSE PE and is a keen footballer. He has represented the school football team since year 7 and is willing to get involved in any task or activity asked of him. William has blossomed this year, finding his niche in officiating. He completed his young football official's leadership course with Staffordshire FA earlier this year. Through the Winter, and often in freezing cold conditions, William helped to run the primary football competitions under the watchful eye of Mr Inskip who was impressed with his commitment and the manner with which he approached his role. William also officiated the U14 girls' football competition for 8 weeks, every week for approximately 2 hours without fail. William was probably the most surprised about his appointment to the role but we hope that he will grab the opportunity with both hands!

Reece will lead Newton house. Reece is a talented all round sportsman, he can turn his hand to many activities and achieve excellent standards. His true passion lies in football and basketball. Reece has represented the school in every sport you can think of, he has even given Netball and Zumba a go in his GCSE PE lessons! He thrives on performing to the highest possible level but is also at his best when sharing his love of sport with others. We first noticed Reece's real leadership potential when working with primary schools in our sports festival during skills week. His ability to make all pupils feel comfortable and his ability to adapt activities to help them achieve makes him instantly likeable to all the pupils he has worked with. We hope that he can extend these skills even more over the next 12 months.

Megan will lead Bannister house. Megan is another talented all rounder. She is an excellent ambassador for girls PE. She has already won national titles in Kick boxing, under the guidance of her coaches at Black Cobra Kickboxing Club. Despite a debilitating ankle injury, Megan is still training in preparation for an international competition in Geneva in the Summer. In addition, she is an extremely talented gymnast and her trampolining is also second to none. Megan has completed leadership courses in Trampolining and can now assist a club coach in the delivery of club sessions. She is also a regular member of the netball, rounders and athletics team. Let's hope that she is able to pass on her obvious natural talent and love for sport to the pupils she comes into contact with.

Jack will lead Shakespeare house. Jack is a naturally talented sportsman. He has represented the school in a huge amount of fixtures and competitions. He is a gifted footballer and basketballer but has this year has reached new levels in his performance. Jack won the Newcastle schools 400m and went on to represent Newcastle district in the 400m at the county competition. In addition to his practical ability, Jack's real strengths lie in his academic studies, he has set himself exceptionally high standards academically and performs well in all subjects across the school curriculum. He understands that his studies are as important as his sports performance and balances his study and physical activity perfectly in order to get the best out of both. We hope that he will be able to encourage the pupils in his house to have the same exemplary attitude to school life.